I was honored to be invited to submit a small group of small works (8×10 or smaller) to this summer’s show at the Montminy Gallery in Columbia, Missouri. Each artist was to submit a story or statement of how the works fit together.

My exhibit and story was titled: “Heavenly Garden: Remembering Helen,” in honor of my paternal grandmother, Helen Cummins. You can read it here:

My Grandma Cummins, Helen, was an artist in the garden, in the kitchen and at the quilting frame. I loved growing up across the highway from her Northwest Missouri farm house, with its huge garden and our shared barnyard. I can remember her patiently showing me how to plant zinnia seeds as a little girl; the African violets on the white metal cart in her front room; her beloved roses. 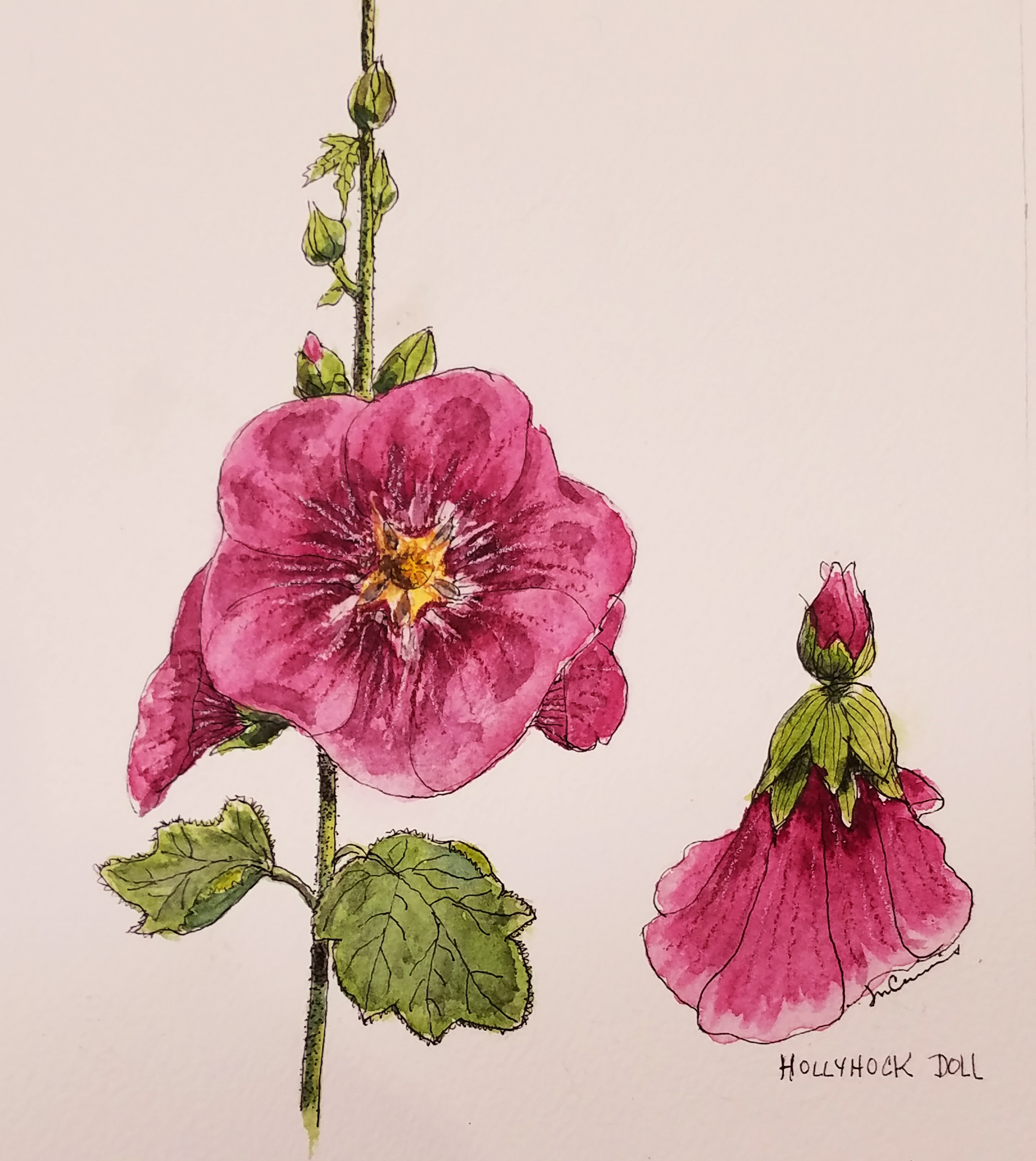 I learned to make dolls from the hollyhocks growing next to her cinder-block garage, and loved the fragrant peonies north of her house. I don’t “garden” like she did, but I enjoy using her garden tools as I pot annual flowers, prune our spirea and rose bushes, and encourage the native plants in my woodland meditation garden behind our suburban home. 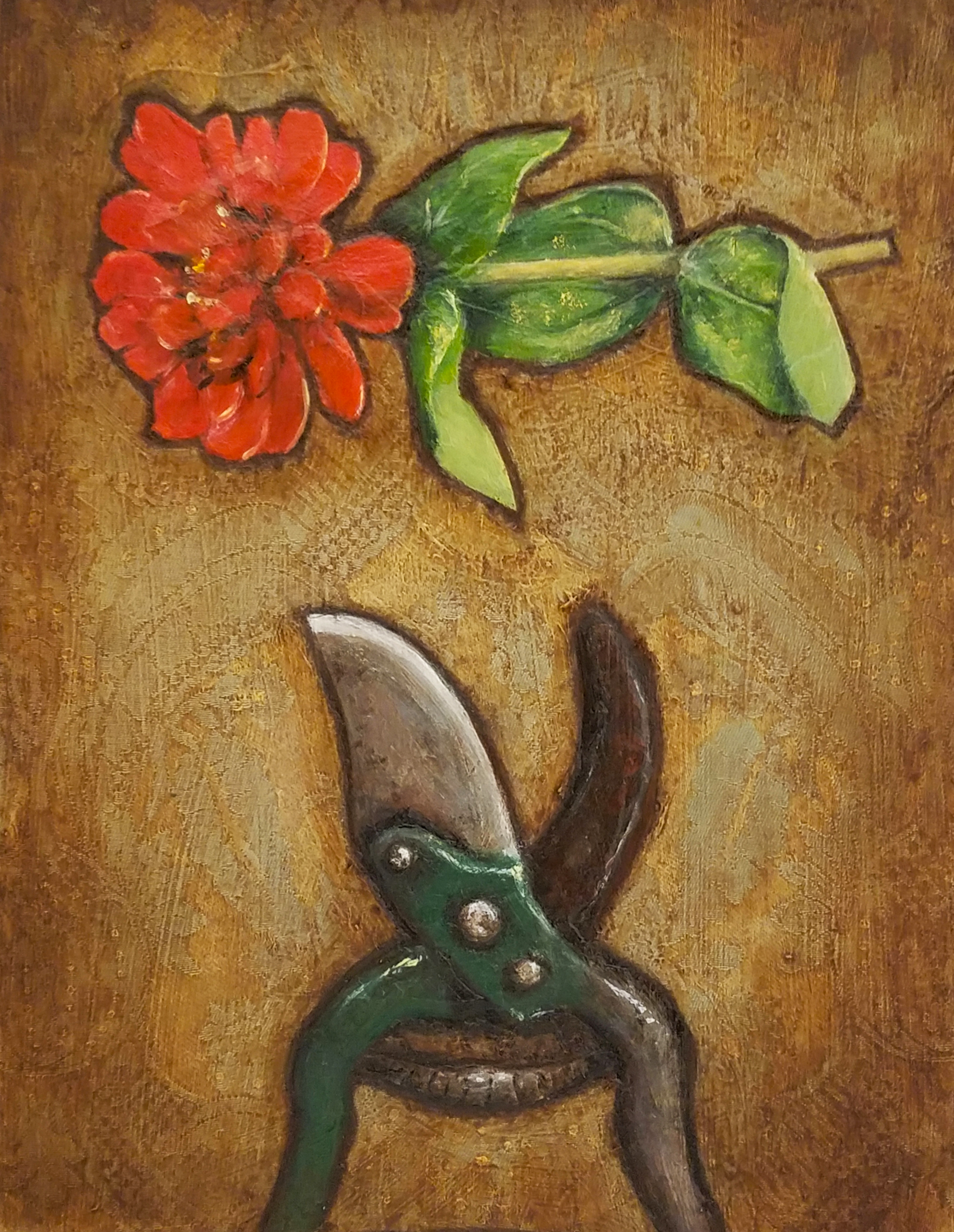 I did inherit Helen’s green thumb and love for house plants, and I keep an African violet blooming in my kitchen window in her memory.

We lost Grandma to an undiagnosed brain tumor at the start of my 8th-grade year. She was 68, only 8 years older than I am now. The works I created for this exhibit are an homage to her talents and to ways I feel still connected to her spirit through plants, flowers and gardens.

Part of the name of this series, “Heavenly Garden,” comes from discovering that we were devoted to the same saint, years and half a country apart. I’d never heard of St. Thérèse of Lisieux, “The Little Flower,” until I moved to Philadelphia in the 1980s and was drawn to her.

Then, just a few years ago, I was given Helen’s prayer book. When I opened it, I found a slip of pink paper with these words written in her handwriting:

St. Therese, the Little Flower, please pick me a rose from the heavenly garden and send it to me with a message of love. Ask God to grant me the favor I thee implore, and tell Him I will love Him each day more and more.

Around the same time, my mother gave me a beautiful quilt, the last one Grandma designed and pieced together, hexagon by hexagon.

The name of the pattern? “Grandmother’s Flower Garden.” Thank you, St. Thérèse, and thank you, Grandma.

My mother, Louise Cummins, reminded me this week that it was her mother, my Grandma Wilkerson, who, in her 80s, finished the row of flowers on one end of the quilt top, using purple fabric from the dressing gown my mother wore when she went to the hospital to give birth to me. Then Grandma Wilkerson’s neighbor in their independent living apartments did the hand-quilting.

My painting “No Country for Old Women” hit the web and the streets of San Diego today when it was used the cover illustration of the Jan. 28, 2016, issue of the San Diego Reader. Art director Jessica Wentzel requested permission to rearrange the elements in the existing painting to fit her cover design, and I agreed.

While I created the painting in 2010, it’s uncanny how well it illustrates the cover story, “None Shall Pass,” about a man who says he was shot last July by a 63-year-old woman sitting in a folding chair in the middle of a gravel road that was a disputed easement. She goes on trial for attempted murder in March; fascinating story.

This is the cover:

This is the original painting: 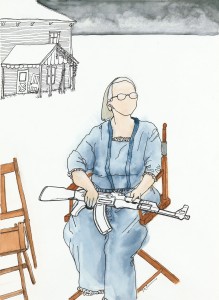 FYI, the original painting is framed behind conservation clear glass and for sale ($300) — done in pen & ink, watercolor and Chinese brush painting on Arches paper. Contact me if you’re interested (click Contact in top menu).

(and the dish ran away with the spoon)

I had the honor of being paired with Columbia poet and writer Bridget Bufford in last fall’s Interpretations III show at the Columbia Art League.

Bridget was given my painting “No Country for Old Women,” without the title or my name, and was charged with writing something in response to it, interpreting it in her own words:

“No Country for Old Women”

Here is her amazing poem:

(and the dish ran away with the spoon)

Her daughter went first. Julie, like a cat, came home less and less, until she didn’t. Then the couch took off with the love seat, followed by her bed. One morning the TV was gone.  By the time the refrigerator left, she had misplaced her mouth. The dishwasher, bolted in, made a racket at night but remained, longing for the stove and microwave.

In the blank white days, the house itself grew restless — bored, perhaps, or lonely. She detained the last two chairs at gunpoint, but they sneaked into the yard, creeping a bit farther with each passing day.

In turn, I was given one of Bridget’s poems, “Rift,” and asked to create a visual response to it.

Here’s Bridget’s poem, which can be read two ways — across the full lines, or down the left side then down the right: 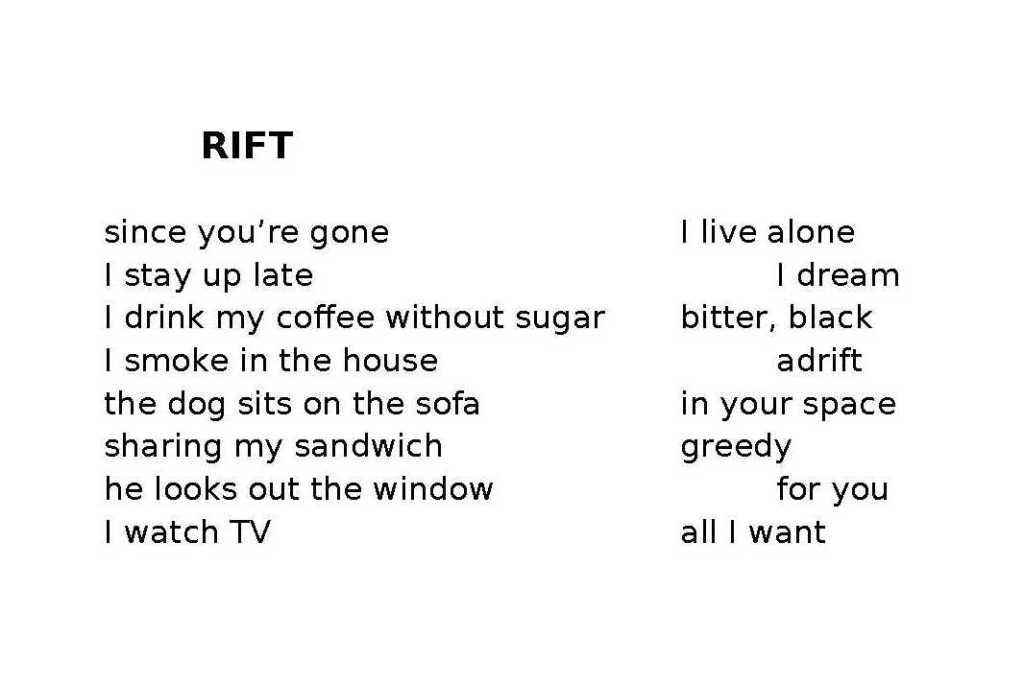 I struggled with how to portray the scenes coming to me as I read it over and over. How literal to be? What point of view to use? Who was speaking in the poem, a man or a woman? (I always saw it as a man, for some reason.)

The deadline was getting closer.

Then Betty died in late July 2015. Betty Hodgman, the brave, sweet, cantankerous heroine of my college friend George Hodgman’s best-selling book, “Bettyville: A Memoir.” I was heartbroken for him, and sad that I was hours away in the middle of a week-long work conference in Arizona when both his loss and the funeral happened.

But I had my inspiration. The scene was the living room in Betty’s home, where I had visited earlier in the year. The dog was Raj, George’s rescued black lab I knew would be mourning his mistress. Betty’s sofa, pillow, rug, breakfast table, window. George’s books, remote, cigarette. It was George, Raj, and all of us who loved her, missing her.

Bridget was puzzled by the slippers I included although they weren’t in the poem, but they were a recurring character in “Bettyville,” and I had photos of Betty wearing them. They are what George and others mention most when they see the painting, “Missing Betty.” 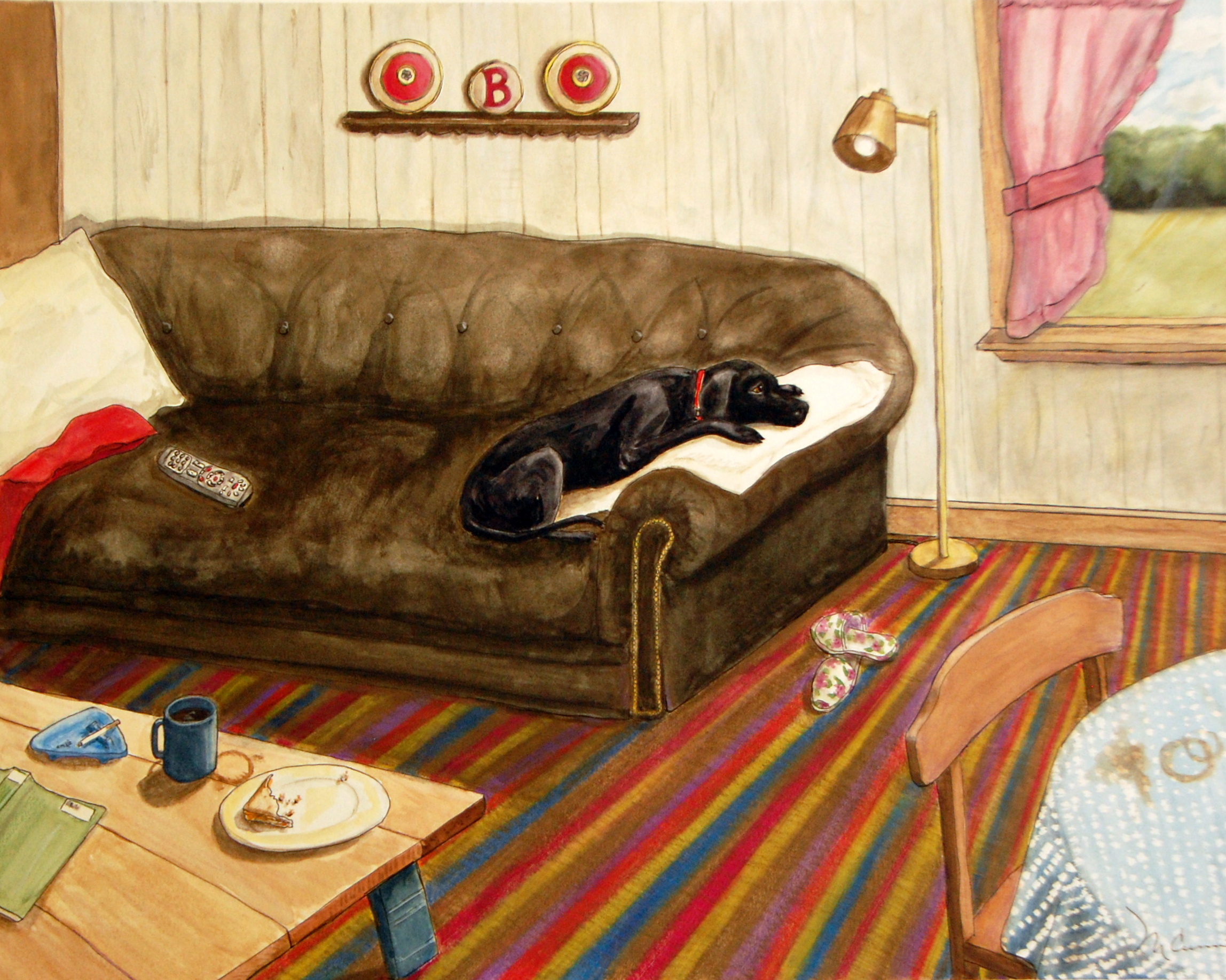 “Missing Betty” 2015. Watercolor and colored pencil on Bristol board.

It hangs in George’s bedroom now, in his home town of Paris, Mo. If you haven’t read Bettyville, I can’t recommend it highly enough. It’s coming out in paperback this February (2016) and is up for two major national awards right now.

Places to read about George, Betty and Bettyville:

George is so good to correspond with his readers on Facebook and in person at his many readings. His upcoming tour is listed in a post on his Facebook author page, the second link below.

Buy the book at your favorite bookseller or find it at your local library. Have tissues handy, and be where you can laugh out loud. 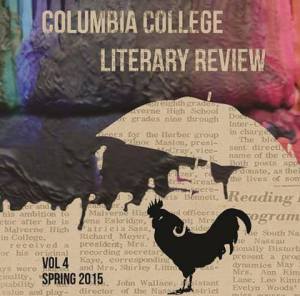 Cover of the latest issue of the Columbia College Literary Review where two of my paintings are published.

Excited and honored to have two of my paintings accepted and now published with a brief bio in the Spring 2015 edition of the Columbia College Literary Review from Columbia College, Columbia, MO.

No Country for Old Women. Giclee prints available in my store on Etsy.com, InvincibleSummerArt